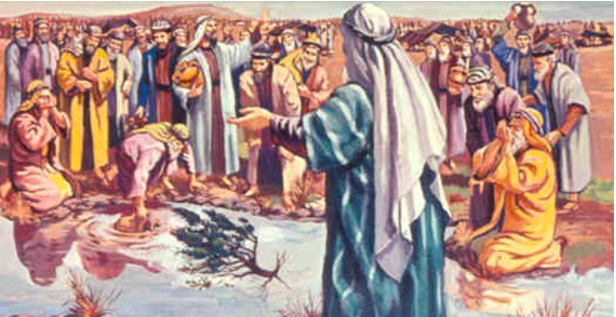 “And the LORD said to Moses, ‘I have heard the grumbling of the people of Israel. Say to them, “At twilight you shall eat meat, and in the morning you shall be filled with bread. Then you shall know that I am the LORD your God”’” (Exodus 16:11-12).

After Moses brought the Israelites out of Egypt, they were ecstatic. They had seen God part the Red Sea and then drown the Egyptians in it, and now He was leading them with pillars of fire and of cloud. Clearly, He was for them, and He would bring them to the good land He had promised. What could possibly go wrong now?

And then things started to go wrong. After a few days in the wilderness, they ran out of water, and the only river nearby was bitter. The people’s immediate reaction was to grumble. The ones who had so recently witnessed God make dry ground in middle of the sea now complained that they would die of thirst. Moses didn’t know what to do, but God instructed him to throw a log into the water, and it became clean. The people were instantly happy, glad that God was still looking out for them.

Things went relatively well for a while. But then, they started to run out of food, and they immediately began to complain again. They claimed that it would have been better for them to die in Egypt than in the wilderness; after all, they’d had food in Egypt. Never mind the slavery part; at least they weren’t starving! When God heard their complaints, He answered in a curious way, saying, “‘Behold, I am about to rain bread from heaven for you’” (Exodus 16:4a). He also promised to send quail. And by morning, that is exactly what happened. Quail had flocked to the camp overnight, and the ground was covered with “a fine, flake-like thing, fine as frost on the ground’” (Exodus 16:14b). The Israelites called this strange substance manna, and they would eat of it every day until they finally arrived at God’s promised land. In an impossible situation, God had provided in an impossible way.

Like the Israelites, there is always something we need. Maybe it’s food, money, friends; whatever it is, it’s something very important to us. Often, it can seem like the thing we need is too far away to grasp, like it’s something we can never achieve. Looking at the situation, it’s easy to despair. A little whisper of doubt starts to wonder, “Is this something that’s too hard for even God to do?”

Fortunately, the answer to that is always a resounding “no.” God is all-powerful; there is literally nothing He cannot do. He is able to provide, and He knows our needs better than we do. When the Israelites needed water, He turned a bitter spring sweet. When they needed food, He rained bread from heaven. Whatever their need, He was able to meet it in a completely unexpected way. He still does the same for us. We can’t know how He will provide, but we can have confidence that He will. He has promised this, and we know that He is a trustworthy God. Instead of despairing, He wants us to take our needs to Him. Tell Him what you need, and trust that He will provide. You’ll be amazed at the things God can do.