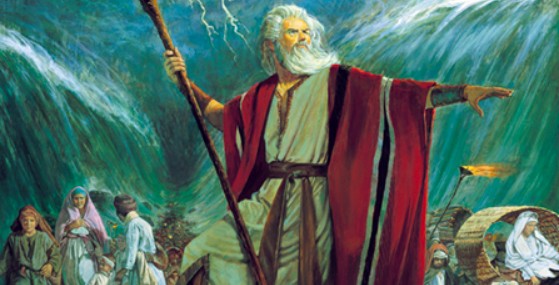 “Then Jesus said to His disciples, ‘If anyone would come after Me, let him deny himself and take up his cross and follow Me.’” (Matthew 16:24)

There’s a word that’s heard often in Christian circles. We talk about it, sing about it, encourage others to do it. It’s a very simple word, but when it comes down to it, it’s one of the hardest things to actually do. That word is “surrender.” We talk about surrendering our lives to Jesus, surrendering our wills to His service, and much more. But how do you actually do this? And what does it really mean?

The Bible is full of people who gave up their lives to follow God’s calling. One excellent example is Moses. If anyone knew something about surrendering to God, it would be him. His life was interesting from the very beginning, when his parents had to hide him for three months so he wouldn’t be killed just for being alive. After that, he grew up as a prince in Egypt for forty years, but after killing a man he ran into the wilderness of Midian. There, he married and lived forty more years as a shepherd. Most likely, he assumed he’d never return to Egypt, and that was fine with him. He had everything he wanted in Midian—a family, a job, security. But God had other plans for him. One day, He appeared to Moses and told him to return to Egypt and demand the Israelites’ freedom from Pharaoh.

At this time, Moses had a choice to make. He really, really didn’t want to go back to Egypt. He’d been hiding for forty years, and he was content for things to stay just like they were. But he didn’t want to actually tell God “no,” so he started coming up with all sorts of excuses as to why he wasn’t the right person for the job. When God kept answering all his excuses, however, he finally said, “‘Oh, my Lord, please send someone else’” (Exodus 4:13). To which God replied that no, Moses was still going, but he would have his brother Aaron to help him. And so, almost against his will, Moses headed back to Egypt.

Moses and Aaron appeared before Pharaoh multiple times, delivering God’s message to him. Every time Pharaoh refused, a plague came upon Egypt. Finally, after ten horrible plagues that completely ravaged the country, Pharaoh let the people go. The Israelites were finally free, and Moses led them out of their slavery. It would be a long time before they finally reached the home God had promised them, but during that time, the entire nation of Israel would come to know their Lord more and more, and He would bless them greatly.

Now, let’s pause for a moment. What would have happened if Moses had still refused to go to Egypt? God would have certainly delivered His people in another way, but Moses would have completely missed the blessing God was waiting to give him. While the Israelites entered into a covenant with God and became His chosen people, Moses would have been back in Midian tending his sheep. Talk about a missed opportunity.

God is still calling us today. As His followers, He has a job for each of us, and it’s one that holds blessings we can’t possibly imagine. But so often, we look at it, compare it to what we want, and say, “Thanks, but no thanks. I like my plans better.” And so we continue in our comfortable lives and miss out on everything God wanted to give us.

When Jesus told His disciples to follow Him, He didn’t pretend that things would be easy. In fact, He compared His call to a cross. It’s hard to follow God; there’s no use pretending otherwise. But we must come to the realization that it is always worth it. Jesus went on to tell His disciples that “‘whoever would save his life will lose it, but whoever loses his life for My sake will find it’” (Matthew 16:25). God knows what’s best. He doesn’t call us to destruction, but to joy. We must be like Moses, like the disciples, and just follow him. It will never be the wrong choice.