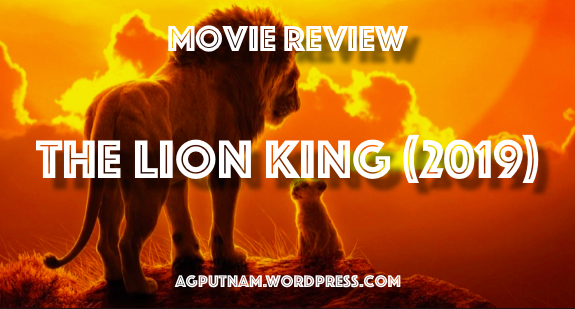 The 2019 version of The Lion King entered theaters last week, much to the excitement of many fans. The 1994 original is a true masterpiece, beloved for many years by children and adults alike. In 2016, Disney announced that they would be tackling a remake of this classic, and it has now been released to a host of mixed reviews. This post features my thoughts on this recreation of a work of art.

Young Simba has just received some very big news: one day, he’s going to be the ruler of the Pride Lands. He is thrilled about this and quickly determines to be a king like no other. But after a horrible accident throws his world into turmoil, he is forced to flee his home. Assuming a carefree life of nonchalance, he decides not to worry about the past. After all, it’s behind him; all he can control now is his future. But the past has a way of catching up to you, and Simba’s journey is far from over…

I’ve been a fan of the original cartoon version of The Lion King for as long as I can remember. The name “Mufasa” causes my family to shudder, and it isn’t at all unusual for some of us to burst into a rousing chorus of “Nants ingonyama bagithi baba”. It’s one of those movies that I can watch again and again and love every time. Because of that, I had a good bit of expectations coming into this live-action (or is still considered animated?) remake. Would it be as good as the cartoon? What would be different about it? Could Scar possibly be as evil as in the original? Would that one scene still give me goosebumps, and that other one make me shed a few tears? Needless to say, I was very much looking forward to this movie. But how did it really measure up?

Wow. I mean, wow. This might have been my favorite part of the movie, getting to see my old buddies in such a realistic way. While some things still looked a wee bit CG-ish every now and then, I had practically no trouble imagining that these were real animals. The way they talked, moved, looked around—it all seemed so animalish and true-to-life. Sure, animals don’t really talk (or sing), but if they did, I imagine they would look very much like the characters in this movie. Definitely five stars for this.

Again, wow. I liked just about all the voice actors and was pleased with the way they portrayed their respective characters. The decision to have James Earl Jones reprise his role as Mufasa was an excellent choice—because really, there can never be another Mufasa. Based on the trailer, I was a little concerned that Scar would prove to be less-than-menacing, but I was pleasantly surprised at how well Chiwetel Ejiofor played him. And although I couldn’t help but picture Lando Calrissian every time Simba spoke, I thought Donald Glover did a very good job with his character, too.

And also, can we just have a geek-out moment? Darth Vader, Mordo, Lando Calrissian, and King T’Chaka are all in the same movie! How cool is that?! 😀

One of my favorite things about the original cartoon is the music. The soundtrack is one of my all-time favorites, and the score might be my favorite Hans Zimmer work. Zimmer returned to write the music for this remake, which was a very good choice, indeed. He improved upon his previous work, creating an even more exotic, goosebump-inducing soundtrack. All the original songs are there, too (though some are in a condensed form), so you can easily sing along. If your fellow theater-goers are okay with that, of course. 😉

Okay, I’ll be frank—I’ve seen this movie before. This version of the movie is the textbook definition of a remake. Practically every scene was taken from the cartoon, and though most were altered slightly, some of them were exactly the same, just with better graphics. While I get that the creators of this version were trying to stay true to the original, it made for a somewhat bland experience. After all, if I want to watch the cartoon, I can just watch the cartoon. Based on the other remakes Disney has been putting out, I was hoping for some differences in the plot; maybe some squabbles between the lionesses and the hyenas back in the Pride Lands, or Timon and Pumbaa’s lives as outcasts somehow being connected with Simba’s backstory. (Okay, okay, so that one’s a long shot…) Basically, a little variation would have been welcome. As it was, there were very few surprises in terms of story. It was really just a repeat of the cartoon.

What I’m about to say probably won’t make sense in light of the previous comment, but please bear with me. One thing the movie did change was the hyenas. In the cartoon, they’re just these three goofy buddies who think Scar’s the greatest thing that’s ever happened to them. In the remake, however, they have lives of their own. They don’t work for Scar; they don’t even like Scar. There are only two of them that are funny, and we don’t even know their names. Shenzi, Banzai, and Ed were some of my favorite characters in the cartoon, and while I understand why this version chose to change their roles, it was a little sad not to have them there.

So, the final verdict: It was a good movie. If you liked the original, there’s really no reason why you shouldn’t like this one. But that’s the thing; this version was literally just a redo of the cartoon. They took the story, the lines, even the arrangement of the scenes, and remade them with realistic-looking graphics. And while that was cool, it wasn’t what I’d hoped for. I was looking for something new and instead received a repackaged version of the original.

I’ve seen nearly all of the remakes Disney has been putting out lately, and two of my favorites are Aladdin and Cinderella. In each of these, the story is obviously based on the original cartoon, but there are enough differences and novel occurrences to make it feel like an entirely new movie. Instead of taking the cartoons and reenacting them, they took the basic ideas and reworked them to make something fresh. This is where I think The Lion King went wrong. In an effort to stay true to the film we know and love, the creators of this version failed to branch out and explore further into the story. They strictly adhered to the original script, and because of that, all we get is just a new look. So if you’ve loved the cartoon for a long time, there’s no reason why you shouldn’t like this version, too. Just be prepared; the circle of life is the same as it’s always been.

Have you seen the new version of The Lion King? If so, what did you think? What are your thoughts on the other Disney remakes? Would you like to see more movie reviews on this blog?